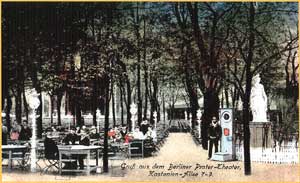 The first recorded political gathering was a party celebrating the foundation of the General German Workers' Association. Set up by Ferdinand Lasalle in 1863, it was Germany's first labor party. It marked its 8th birthday with a mixture of political agitation, beer and dance music.

Among other performances, Dr. v. Schweitzer's play »Goose – A Dramatic Conversation on the Extension of the Female Job Market« (Eine Gans – Dramatisches Gespräch über die Erweiterung des weiblichen Arbeitsmarktes) was staged at Prater. In 1878 Bismarck's Anti-Socialist laws banned all gatherings and celebrations that had an overtly political character.

However, the politically active proletariat founded singing and sports clubs as well as other associations under the pretence of which they could continue their celebrations and agitations at Prater. After 1891, the premises on Kastanienallee became a central venue for the annual May Day festivities.

Still, it was primarily non-political entertainment that found its place at Prater. Paul Kalbo II put on daily special performances during the summer. These included musical comedies, burlesque shows and operettas, even pantomime and puppet shows.

Meanwhile, most of the performances tended towards a display of patriotism – marching music to honour the Battle of Leipzig or pieces like »Les Dragons de Villars«. In winter the ball season commenced. It attracted a mixed clientele that included merchants and civil servants as well as maids, respectable families, workers and soldiers.

In 1902, Martha Kalbo, the widow of Paul Kalbo III, applied for a concession to perform classical plays with more than one act. She received approval to stage »refined« operettas fifteen times a year alongside the regular dance hall entertainment.

Martha Kalbo was so enthusiastic that she enlarged the performance venue in 1905. The new building had an upper storey and an elegant façade. The large auditorium became a fully operational theatre with a fly system, thunder machine and fire curtain.

The theatre opened on May Day with Friedrich Schiller's »Intrigue and Love«. With it started the first Prater crisis - the public preferred light entertainment and started to desert the venue.

Martha Kalbo was too good a businesswoman to ignore the first mistake in a long line of Kalbo successes. Soon the venue hosted brass band concerts again, Joe Will performing tricks on his bike and pieces like »Oh what a Mother in Law«.